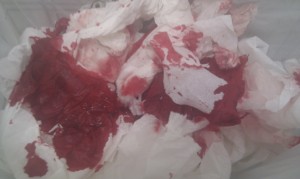 It’s monday again. More frustration about stupid people. All the idiotic things I read from news is making me sick – literally. My nose started bleeding and now my toilet looks like a slaughterhouse. People just go forward to the same direction with everyone else. Straight down from the ledge without questioning. It seems to be difficult to accept that majority could be wrong. Often individuals have the best ideas, but it takes a lot of courage to fight agains the windmills and prove your point. Yes. It needs to be proven. elseway no-one will believe you.

I would needd programming help with my project that would make world much better place. It would harness the technology used by big corporations to help daily life of normal people. Just like computers did 30 years ago. That would revolutinize everything and improve quality of life and health of millions. That would evvect in savings of billions of dollars. It’s something so big that of course most people do not dare to think in those terms.

People are so stupid. In front of something brilliant they say “if it was a good idea someone else had already done it” but when someone is proposing them to make big bucks in a pyramide game they think it’s a splendid idea because so many of their friends went in with the same foolishness. There they don’t think that if it really was a good investment maybe Warren Buffet etc. also would be in.

This site uses Akismet to reduce spam. Learn how your comment data is processed.