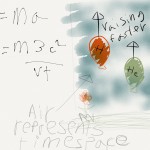 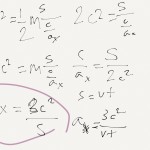 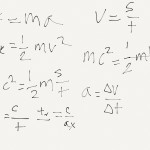 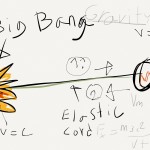 “It might be difficult to understand that at the moment of Big Bang things are moving ad speed of the light, but actually it’s quite easy when you try to imagine the immense power of that moment.”

“Everyone has heard that time is not linear, but it’s not easy to understand what it means. Timespace or “the black matter” is just like air. It’s there but we do not really see it. A balloon that is more lightweight than air is raising higher. The heavier hellium balloon is raising slower thatn the one with hydrogen. Same goes with time. Heavier objects move slower through time than the lighter ones”

I have been waiting with this post. All the news and social media was so full of “Fearless Felix” that I felt thaqt I should not comment it.

Anyhow the event was so Important to me that I need to say something. You know, I did not see the moon landing and I will probably also miss the Mars landing. So this might be as good as it gets. To sit some hours by the screen and to listen how they go through their checklists. “Felix would you give me the presure inside, would you give me the pressure outside” etc. Wonderful. 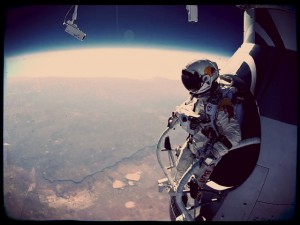 Another aspect is the precence of Red Bull as sponsor. There has bee a lot of critic about how this company can risk a person’s life for a publicity stunt.

It was not just a publicity stunt. This kind of experimenting was earlier funded by governments but after the cold war they simply stopped doing things.

It’s important that private companies will fill this void. SpaceX is replacing the shuttle missions with private rockets. Mars one is planning ro send person to mars with private money and many other companies are funding space tourism.

Maybe someone also would like to pay my trip. Red Bull do you hear me?

I just love the way how the streetlamps are swinging in the wind. Independently, beautifully. You know the ones that are hung on wires over the street. I just love that restless, but yet so peaceful motion. I have been away for months. Somewhere deep inside my head. On the edge of the space and universum. Looking for the deepest secrets, but not even finding myself. I haven’t been eating, but still I’m as fat as always. Been sleeping under my bed listening to the cars passing by. Seeing strange dreams about fights and battles. The struggle of man. Misery. In the end there was a big dark biomechanical vehicle. Like a one that could be designed by H.R. Giger. It’s big cannon targeted towards my house. A dark man stepping out and bright light turning on.. and then nothing.

It’s funny how this whole thing is twisting my mind. I promised to myself that I would not think this too much. I should live normally and then just do it, when it’s the time. Still I’m noticing how differently I’m thinking about some things, like water. Yesterday I actually enjoyed getting a little wet when walking along the rainy streets. In park I stopped for a moment to look at the water pond and how beautifully light is reflecting from the surface. Later on the only water I will be seeing or drinking is my own pee.

I’m also continuously going through all kind of worst-case scenarios. It might be useful since that way I can be better prepared. Still there are just too many factors that I can not control. I’m seeing nightmares about things that can go wrong. Last night I saw over and over again the same dream, where some kind of leakage was causing fire and explosion. I’m not sure if I should too much think about this, since I’m pretty sure I will not be able to prevent such things anyhow.

Today I spent some time trying to refine my new theory of everything. That will be a simple thery that combines quantum theory with gravitation. Actually I also will try to explain what gravitation is.

it’s difficult to explain because people can not easily understand things outside the three dimensonal world.

Gravity is a force that is equivalent to the object’s distance from 0-level in a x-dimensonal space. I will explain better later. As a hint I can tell that it’s in relation to 1/c.

Obviously my Internet-connection will not be very good on my trip. Actually there is nothing planned, but I’m sure they will connect me when I ask them to. Around Mars orbit, the delay to earth will already be about 20 minutes and it’s getting much worse after that. It should not be big issue. My first experiences about online discussions were at BBS-era. I was using my 2400 bps modem to upload the stuff I got from Internet. Thanks to Z-moden protocol (or something) I was able to chat with SysOp while uploading. Strange discussions about life, death, religion, UFO’s etc. I miss those times.

I’m walking alone in this land of darkness. Dark faces staring at me from the distance. No place to go or to hide. I start running away. I keep running until my shoes have been worn off. I keep running on the red burning surface of this damned world. Then I take one big leap and I rise to the sky. Then I feel free. I feel the cooling breeze on my face. People below seem so small. I feel pity for them. I am free.

How can you tell. First love. Destiny. They always say that you cannot forget the first love. They say that it feels  different because it’s something new. What if they are all wrong. What if there is just one love. There is just one arrow that Amor shoots. You only need to be sure that it really is real love and then stick to it. Maybe there is no second chance.

I fell in love once. Never again I have experienced anything like that. I have met many girls but never something where the imperfection makes it perfect. Forbidden fruit that you cannot forget after you taste it. Something that attaracts you even more when it’s gone.

I met this girl again. You could say it was destiny but it wasn’t. It was a test. After 15 years of walking to opposite directions we met. She was there waiting for me. I was nervous but when I saw her I felt like I had always been there. One night. Endless love. I have not seen her ever since but that made me to believe in real love stronger than ever. This love is so strong that no distance and time chan change it. Twenty years, hundred people and thousand mountains can come between us but the love will not disappear. It stays strong and keeps me going. Until we meet again.

Dragon was powered by Falcon 9 rocket and it has succesfully entered the orbit. It is carrying over 6000 kg of food and other supplies to the international space station. Think about 10 m3 pressurized storgae with internet connection and tons of food, water etc. That sounds like suitable ship for my trip, but the problem is that it’s lacking a life support system. I would not stay alive for long. Probably wouldn’t even survive the trip to orbit. In principle it might be possible to tweak the electronics of the ship and make it to use electrolysis to break the water in to oxygen and hydrogen but then it would be a problem to get rid of the hydrogen.. Will not work :(

Today a strange thing happened. I was doing my normal afternoon walk in the outskirts of the city when I decided to pop in a restaurant to have a pint. I had walked past it multiple times but never went in. Now I opened the door and noticed that it’s a kind of food place, full of people having dinner. I sat at the bar wearing my Barbour jacket and red Cousteau-style hat. As soon as I sat down, the bartender winked at me and gave a beer for free. He pointed me to the other bartender who also winked. Maybe they mixed me with someone else. No one here should know about my intentions. Anyhow I was getting nervous about the situation so I quickly emptied my glass and left the place.

I spent most of the day relaxing at home. When dusk arrived I was feeling restless and I decided to go for a little walk. I was wandering along the empty city streets and took some photographs about the fascinating play between lights and shadows. Finally I ended up in a pub. Almost the only place alive this evening. So here I am writing and thinking. Not at once has the idea of cancelling popped in my mind. Anyhow I’m quite nervous since it will not be easy thing to pull off. Most of the preparations are now done, but there are still lots of things that could go wrong. Mostly I’m worried about things that are out of my power, but now I’m also quite concerned on how I can do my own part when things are getting tough.